The Anatomy Of A Horses Hoof

The Anatomy Of A Horses Hoof 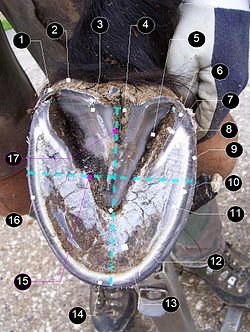 The hoof is made up by an outer part, the hoof capsule (composed of various cornified specialised structures) and an inner, living part, containing soft tissues and bone. The cornified material of the hoof capsule is different in structure and properties in different parts. Dorsally, it covers, protects and supports P3 (also known as the coffin bone, pedal bone, PIII). Palmarly/plantarly, it covers and protects specialised soft tissues (tendons, ligaments, fibro-fatty and/or fibrocartilaginous tissues and cartilage). The upper, almost circular limit of the hoof capsule is the coronet (coronary band), having an angle to the ground of roughly similar magnitude in each pair of feet (i.e. fronts and backs). These angles may differ slightly from one horse to another, but not markedly. The walls originate from the coronet band. Walls are longer in the dorsal portion of the hoof (toe), intermediate in length in the lateral portion (quarter) and very short in palmar/plantar portion (heel). Heels are separated by an elastic, resilient structure named the 'frog'. In the palmar/plantar part of the foot, above the heels and the frog, there are two oval bulges named the 'bulbs'.

When viewed from the lower surface, the hoof wall's free margin encircles most of the hoof. The triangular frog occupies the center area. Lateral to the frog are two grooves, deeper in their posterior portion, named 'collateral grooves'. At the heels, the palmar/plantar portion of the walls bend inward sharply, following the external surface of collateral grooves to form the bars. The lower surface of the hoof, from the outer walls and the inner frog and bars, is covered by an exfoliating keratinised material, called the 'sole'.

Just below the coronet, the walls are covered for about an inch by a cornified, opaque 'periople' material. In the palmar/plantar part of the hoof, the periople is thicker and more rubbery over the heels, and it merges with frog material. Not all horses have the same amount of periople. Dry feet tend to lack this substance, which can be substituted with a hoof dressing.

Characters and functions of the external hoof structures

The walls are considered as a protective shield covering the sensitive internal hoof tissues (like the exoskeleton of arthropods), as a structure devoted to dissipating the energy of concussion, and as a surface to provide grip on different terrains. They are elastic and very tough, and vary in thickness from 6 to 12 mm. The walls are composed of three distinct layers: the pigmented layer, the water line and the white line.

The pigmented layer is generated by the coronet, and its color is just like that of the coronet skin from which it is derived. If the coronet skin has any dark patch, the walls show a parallel pigmented line, from the coronet to the ground, showing the wall's growth direction. This layer has predominately protective role, and is not as resistant to ground contact, where it can break and flake away.

The water line is built up by the coronet and by the wall's corium (the living tissue immediately beneath the walls). Its thickness increases proportionally to the distance from the coronet and, in the lower third of the walls, is thicker than the pigmented layer. It is very resistant to contact to the ground, and it serves mainly a support function.

The white line is the inner layer of the wall. It is softer and fibrous in structure and light in color; white in a freshly trimmed hoof, yellowish or gray after exposure to air and dirt. From the underside of the healthy hoof, it is seen as a thin line joining the sole and the walls. The white line grows out from the laminar connections. Any visible derangement of the white line indicates some important derangement of laminar connections that fix the walls to the underlying P3 bone. Since the white line is softer than both the walls and the sole, it wears fast where it appears on the surface; it appears as a subtle groove between the sole and the walls, often with some debris or sand inside.

The three layers of the wall merge in a single mass and they grow downwards together. If the wall does not wear naturally, from sufficient movement on abrasive terrains, then it will protrude from the solar surface. It then becomes prone to breakage, and the healthy hoof will self-trim, by breaking or chipping off.

When a horseshoe is applied, it is fixed to the wall. Nails are driven in, oblique to the walls. They enter the wall at the outside edge of the white line and they emerge at the wall's surface, about 15 to 20 mm from the base of the wall.

The wall is anatomically analogous to the human finger or toe nail.

The frog is a V shaped structure that extends forwards across about two-thirds of the sole. Its thickness grows from the front to the back and, at the back, it merges with the heel periople. In its midline, it has a central groove (sulcus), that extends up between the bulbs.

It is dark gray-blackish in color and of a rubbery consistency, suggesting its role as shock absorber and grip tool on hard, smooth ground. The frog also acts like a pump to move the blood back to the heart, a great distance from the relatively thin leg to the main organ of the circulatory system.

In the stabled horse, the frog does not wear, but degrades, due to bacterial and fungal activity, to an irregular, soft, slashed surface. In the free-roaming horse, it hardens into a callous consistency with a near-smooth surface.

It is anatomically analogous to the human fingertip.

The sole has a whitish-yellowish, sometimes grayish color. It covers the whole space from the perimeter of the wall to the bars and the frog, on the underside of the hoof. Its deep layer has a compact, waxy character and it is called 'live sole'. Its surface is variable in character as a result of ground contact. If there is no contact, as in shod hooves or when the walls are too long or the movement poor, the lower surface of the sole has a crumbly consistency, and it is easily abraded by scratching it with a hoofpick. Conversely, it has a very hard consistency, with a smooth, bright surface, when there is a consistent, active contact with the ground. The front portion beneath the front of the pedal bone is called the 'sole callus'.

A stone bruise affects the sole of the horse's foot. It is often caused by a horse treading on a stone or sharp type of object, landings from high jumps and excessive exposure to snow. A major symptom is lameness.

Bars are the inward folds of the wall, originating from the heels at an abrupt angle. The strong structure built up by the extremity of the heel and of the bar is named the 'heel buttress'. The sole between the heel walls and the bars is named the 'seat of corn', and it is a very important landmark used by natural hoof trimmers to evaluate the correct heel height. The bars have a three-layer structure, just like the walls. When overgrown, they bend outwards and cover the lower surface of the sole.

The third phalanx (coffin bone; pedal bone; P3 is completely (or almost completely) covered by the hoof capsule. It has a crescent shape and a lower cup-like concavity. Its external surface mirrors the wall's shape. The corium, a dermo-epidermal, highly vascularized layer between the wall and the coffin bone, has a parallel, laminar shape, and is named the laminae. Laminar connection has a key role in the strength and the health of the hoof. Beneath the rear part of the sole, there is the digital cushion, which separates the frog and the bulb from underlying tendons, joints and bones, providing cushioning protection. In foals and yearlings, the digital cushion is composed of fibro-fatty, soft tissue. In the adult horse, it hardens into a fibro cartilagineous tissue when sufficient, consistent concussion stimulates the back of the hoof. Normal transformation of the digital cushion into fibrocartilagineous tissue is now considered a key goal, both for prevention of, and for rehabilitation of recovering cases of navicular syndrome. The flexor tendon lays deeper, just along the posterior surface of the small pastern bone (PII) and navicular bone, and it connects with posterior surface of P3; the navicular functions as a pulley. 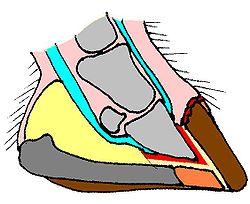 There are several disorders and injuries that can affect the equine hoof. Laminitis and Navicular Disease are two of the most serious. Thrush, a common bacterial infection, can become serious if left untreated. Quiltor, an infection of the lower leg that can travel under the hoof, is also sometimes seen, although most commonly in draft horses.

Quarter cracks are vertical splits in a hoof wall, most commonly seen on the inside of the front hooves or the outside of the hind hooves. They can result from poor shoeing and management practices, natural hoof conformation, or injuries to the leg and hoof.

Parts Of The Horse's Body 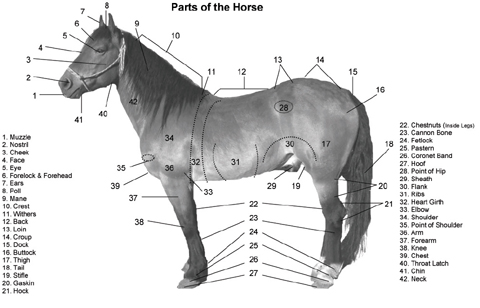