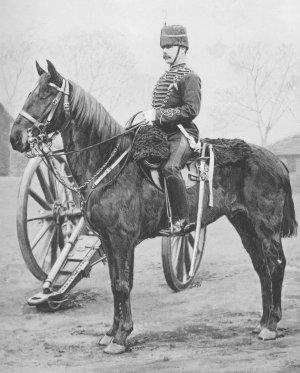 The class of horse that was required for artillery purposes had to be a short-legged, heavy-boned animal, with plenty of substance about him, exspecially in the case of the wheelers, as the work of stopping the guns falls upon them. In addition to their strenghth the artillery horses was also capable of getting over the ground quickly, a cross-bred hackney being as useful an animal for the purposes of the Service as any.

Artillery was as dependant on the horse as the cavalry if not more so. As the principle motive power for the guns, they were a prime target for the opposing force; disabling the horses meant that the guns were at risk of capture. Horses, like the soldiers who depended upon them, were also subject to the rigors of disease, poor rations, and the too-often squalid living conditions of an army camp. The death toll has never been calculated, but the cost of the War in horse flesh was surely enormous.

The large number of horses posed a logistical challenge for the artillery, because they had to be fed, maintained, and replaced when worn out or injured. Artillery horses were generally selected second from the pool of high quality animals; cavalry mounts were the best horses. The life expectancy of an artillery horse was under eight months. They suffered from disease, exhaustion from long marches (typically 16 miles in 10 hours), and battle injuries. As their lives and guns so often depended upon their horses, artillerymen were disposed to accept without excessive grumbling the regulations for their care. The trumpeter would sound stable call after reveille and roll, and water call after breakfast.

The same routine for the horses would be repeated late in the afternoon. Morning and afternoon drill also meant a workout for the horses, after which they needed to be walked to cool down, curried, and probably watered again. There were always sick horses requiring care, and those who died requiring burial.

One driver was assigned to each pair of horses, riding the on (left) horse and holding reins for it and the off horse. Skilled riders were required for this service, which combined the daring of the cavalry troopers, with the precision teamwork expected of the artilleryman and compassion and care for the horses in their charge. Drivers were could be issued with a leg-guard, an iron plate encased in leather and strapped to the right leg to prevent the limber pole from injuring them. Each driver had two horses and their harness under his care.

Each rode the left horse of his team and was held responsible for the feeding, watering, and grooming of the team. They were usually picked for this duty because of their knowledge or skill with the animals. During battle they brought the ordnance into position under the direction of the Sergeant, who was the platoon guide and was mounted individually. The caisson drivers were directed into position by the chief of line of caissons, frequently taking position under hostile fire. Keeping the horses calm during battle and removing harness from downed horses was a skill of the drivers often used. The drivers had to be alert at all times in case the ordnance had to be removed from its position in haste, the ear ever waiting for the trumpet call to marche. However, once the foot artillery battery line was established the drivers would often dismount and lay on the ground with their reins in their hands, depending on the amount of hostile fire being received. This was not possible with horse artillery which would change positions rapidly, and in some cases so did foot artillery batteries.

Though they were not 'up front', the drivers and horses were still killed and wounded, and rounds shots passing close to a battery would cause consternation among the drivers trying to control horses just in rear of the main battery line. The only drivers that were not usually with the battery in battle were those that drove the traveling forge and battery wagon. This equipment was usually in the rear of the army on the march.

The horses were worked hard and long, but it had to be so. A battery racing to catch up with a retreating enemy or to gain a position of advantage had no room for gentle treatment. The stakes were high, and the horses paid the price. The alternative might be defeat. A man on a long, hot march, pushed beyond what his body could bear, might drop out temporarily and catch up with his company later. Horses had no such choice. Harnessed to the limbers, they pulled until they fell or, as happened in most instances, until they harmed their bodies beyond healing, and then were shot becoming the drivers and artilleryman’s next meal.

Mud or dust seemed to plague every movement of troops. Of the two, mud was the greater problem for the artillery. Dust created great discomfort, but little more. While an artilleryman might find it difficult to breathe and intolerably itchy in the suffocating dust, the guns and caissons could still be moved. Mud, on the other hand, often made movement impossible. Sinking below their axles in holes full of clinging muck, guns and caissons could be moved only with superhuman effort, the men pushing at the wheels and extra horses pulling on the traces. Sometimes guns and caissons were simply abandoned to the mud. During the 1812 and 1813/14 campaign, teams were often doubled to draw guns into position.

The capacity of a healthy horse to pull a load was affected by a number of factors. Chief among these was the nature of the surface over which the load was being hauled.

Drawing capacity is based on each horse in the team drawing 900 kg . The offside horses drawing 450 kg . This is for both wheelers and leaders. The third pair of horses in a 6 horse team, not being directly attached to the gun only provide 3/4 of their potential drawing capacity.Weight of system from d'Urtubie 1786.

The goal was that each horse's share of the load should be no more than 350 kg . This was less than what a healthy horse, even carrying a rider and hitched into a team of six, could pull, but it furnished a very important safety factor that allowed for fatigue and losses, resulting that a team of four could draw a fully loaded Girbeauval 12-pdr. The above table clearly shows that the French artillery equipment of Gribeauval had ample horse power to move the equipment over smooth hard roads. Indeed a 12-pdr is able to be moved by a pair of horses, as demonstrated by the recreated horse train of L’association Britannique de la Garde Imperiale. Of interest the table shows that the 8-pdr was as mobile as the 4-pdr in terms of weight per horse, which probably influenced the guns adoption as the principle weapon of horse artillery in favour of the 4-pdr.

In order to apply the tractive force of the team to the gun, the horse had to be connected to it with a harness.

Horse teams consisted either of four or six horses. The two horses at the front of the team were called leaders’, the two attached to the limber the wheelers. In a team of 6, the middle pair of horses were called the centre horses. All the horses to the right of the toungue or shaft were called off horses and carried a light pad saddle in the English artillery apparently, or in the case of Prussian artillery in the 1813 a riding saddle on which gunners could ride. The horses to the left of the toungue or shaft were near horses, and each were ridden by a postillion driver. The harness for the off and near horses were the same, but differed for leader/centre horses and wheelers.

It was recommended that all possible liberty should be allowed the horses when harnessed, in order that the action of one may not shackle the others, that accidents may be as rare as possible, and that killed and wounded horses may be replaced easily and promptly.

The horses are arranged in single file and is well suited to drawing heavy loads over narrow roads. However it is not suited for rapid movement over ordinary roads as much of the tractive force is lost by the continued change in line of traction incident a long column. Also, in this mode of attachment using shafts, only one horse is coupled directly to the limber, thus the remaining are attached to each other, so that the second horse in line applies only ¾ of its drawing potential, the next ½, thence ¼, so in a single line of more than 4 horses, the remaining horses provide little or no potential draw to the team. The horse in the shafts, which by constant fatigue is quickly rendered unserviceable.

In the second method, the horses are attached to the gun in pairs, in double file, a wheel horse being placed either side of the central shaft or tounge, which is attached to the axel tree of the limber. The tounge is supported and kept steady by the pressure of the body of the carriage on the sweep bar, which projects beyond the rear of the limber axel tree. The centre pair in a team or six or leaders in a team of four are attached to a splinter bar at the end of the tounge.

Oops, you forgot something.

The words you entered did not match the given text. Please try again.

Reply what foods to avoid when taking furosemide
7:04 AM on September 19, 2021
Prix Xenical Au Maroc